The Workers They Called ‘Non-People’

The Biden Administration has a duty to acknowledge the humanity of the workforce they’ve deemed “essential.”

It is difficult to grasp the significance of the human loss during the pandemic. In large part this is because people that were called “essential workers” were treated as disposable, and excluded from life-saving relief.  That denial of humanity – of their personhood before the law – is a moral crisis, and a human rights crisis in our country.

The National Day Laborer Organizing Network (NDLON) and its member organizations across the country –  day labor centers, immigrant community centers, grassroots collaboratives – gathered on April 28, Workers Memorial Day, to remember the colleagues, compañeras, compañeros, and loved ones who have passed away in the last year.  We pledged to fight for those who are still here working day in and day out, and recommitted ourselves to fight so that working people are not ignored, dehumanized, and deliberately excluded once again.

In Pasadena, California, 600 crosses were displayed in honor of Workers Memorial Day, representing over half a million people lost to the pandemic in the United States alone.  Among them, too many frontline workers who were not afforded the option to stay home and were deliberately excluded from federal relief packages. 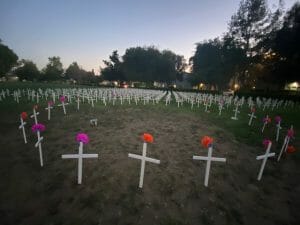 600 crosses on display in Pasadena, California to honor the lives of essential workers lost in the Covid-19 pandemic (Credit: NDLON)

That same day, NDLON released a report – Honrando a los Caidos – Honoring the Fallen – that captures the terrible, human impact of the pandemic on immigrant, undocumented workers of color.

The report reflects the sad reality that undocumented workers were disproportionately at risk of the virus because the industries considered “essential” are also subsidized by undocumented workers, many of whom are constantly threatened with deportation if they speak out about unsafe working conditions.

As the report describes, “the pandemic has painfully exposed deep socioeconomic divisions that fall along lines of race and nationality, even as it has revealed the country’s reliance on immigrant workers and people of color to produce goods and services that are essential to the health of the nation.”

The report is a denunciation of the political body that failed to meet the principles that we purport to believe in – that “all men [sic] are created equal.” That same political body circumvented moral and ethical responsibilities by excluding the working people they simultaneously called “essential” from federal relief.  In the words of Senator Rand Paul (R-KY), these undocumented workers are ‘non-people’ – even while providing the food, the services, the labor, that allowed millions to stay safe at home.

The NDLON report calls on the White House and Labor Secretary Marty Walsh to use their broad discretion to ensure protections that recognize the humanity of Black, Brown, and Asian workers. These are policies that the executive branch can implement, without additional Congressional action.  Specific recommendations include:

There are no more excuses to permit the shameful status quo that allows working people to be treated as disposable, undeserving, ‘non-people.’  The Biden administration and federal policymakers can act to acknowledge and reaffirm the humanity of undocumented workers and their families, and govern accordingly.

These are just some ways to begin to honor the fallen, to defy those who denied their humanity, and to begin to address the human rights crisis that left so many people to die.

Salvador G. Sarmiento works for the National Day Laborer Organizing Network (NDLON). You can follow him on Twitter at @sg_chambita.