A statue of an indigenous woman will soon replace a prominent statue of Christopher Columbus on the Paseo de la Reforma, a wide avenue that runs through the heart of Mexico City. Mexican President Andrés Manuel López Obrador (AMLO) and his allies in the capital city’s leadership are sending a powerful symbolic message: the time has come to stop exalting colonialism.

The Mexican government should also do more to challenge neo-colonialist policies driven by today’s foreign powers. Early in his term, AMLO signed off on a revised version of the North American Free Trade Agreement that made some progress but did not go far enough to allow Mexico to forge its own independent economic development path.

Under the U.S.-Mexico-Canada Agreement (USMCA), transnational extractives corporations still have the power to sue governments in international tribunals over actions that diminish the value of their investments.

Earlier this month, Texas-based Talos Energy filed a notice of intent to file such a lawsuit against Mexico. The oil and gas company is retaliating against the government for having granted control of the large Zama oil well in the Gulf of Mexico to the state oil company PEMEX. Talos argues it won the bidding contest for the well in 2015 and has invested almost $350 million in the project.

If the company follows through with the suit, they could demand much more, since the USMCA includes provisions protecting some foreign investors against “indirect expropriation,” allowing companies to demand compensation for unrealized expected profits.

The Talos threat comes on top of lawsuits already filed against Mexico by several other extractive sector companies, including the mining companies Legacy Vulcan, suing for $500 million, Odyssey for $3.5 billion, First Majestic Silver for $500 million, the oil consortium Finley Resources for $100 million, and from companies in other sectors.

Last July, a bipartisan group of 42 members of the U.S. Congress, led by Democrat Vicente Gonzalez, sent a letter to President Biden demanding action on what are considered “severe limits” imposed by AMLO on U.S. companies’ access to Mexico’s hydrocarbon and energy markets. By favoring PEMEX and state-owned electricity company CFE, the letter alleges, Mexico’s new legislation “violates the spirit and letter of the USMCA.”

This letter sheds light on why the USMCA eliminated supranational investor-state dispute settlement (ISDS) for disputes between the United States and Canada, but kept this mechanism in place between Mexico and the United States, specifically in the energy sector (Annex 14-D of the investment chapter). Powerful U.S. corporations want a share of Mexico’s lucrative resources.

Giving extractive companies such huge power goes against every effort to combat climate change. In contrast, on September 2, the European Court of Justice helped to shift the trend, ruling that European Union energy companies will not be able to use the Energy Charter Treaty (ECT) to sue EU governments. This ruling will help prevent future lawsuits against climate policies.

The ECT is an obscure treaty from the 1990s, signed so far by 53 countries not only in Europe but also by Japan and countries in Central Asia. Like many free trade and investment treaties, the ECT allows foreign companies to sue governments that are parties to treaty for measures adopted in the energy sector that allegedly affect their profits. Governments have already been ordered to pay “damages” for $52 billion.

According to a study by the Transnational Institute and Corporate Europe Observatory, “Negotiations for this treaty mostly took place away from the public eye. This means the ECT has so far largely escaped the global storm of opposition which has otherwise hit investor-state dispute settlement in the past decade. Now many more countries in Africa and the Middle East, Asia, and Latin America are in the process of joining the treaty, often without any public debate. In Latin America, Colombia, Guatemala and Panama are in the process of accession. 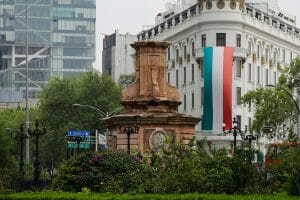 The pedestal where a statue of Christopher Columbus once stood is seen empty in Paseo de la Reforma avenue. Credit: Shutterstock.

Although we’re not aware of any plans by Mexico to join the ECT, the country is entangled in such a web of trade and investment protection treaties that it is exposed to multi-million dollar lawsuits such as those mentioned above. Besides the USMCA, which was negotiated under former president Peña Nieto, the Comprehensive and Progressive Agreement for Trans-Pacific Partnership (CPTPP) allows Canadian mining companies to sue Mexico. And the EU is pushing to include an investor-state dispute settlement mechanism in the EU-Mexico Free Trade Agreement to replace 15 existing bilateral investment treaties between Mexico and European countries.

Given the elimination of these mechanisms between rich countries (e.g., between Canada and the United States and among EU countries) but its perpetuation in treaties between rich and dependent countries, the neocolonial purpose is clear: the plundering of the natural resources and the public coffers of the countries in the Global South.

On September 9, the United States and Mexico resumed the High-Level Economic Dialogue, a mechanism created during the Obama administration aimed at strengthening the neighboring countries’ economic and commercial relationship. The initiative was dormant during the Trump administration. Mexico should use this process to negotiate the elimination of Annex 14-D on investment from the USMCA.

During talks with the EU to “modernize” the EU-Mexico FTA, they should also refuse to accept these excessive powers for transnational corporations. To do otherwise would be an incomprehensible act of servility.

AMLO’s goal of ending neoliberalism cannot be reached if the neocolonial system of so-called “investment protection” continues to serve as a weapon for corporations to pillage Mexico’s natural resources. Following the recommendations of the UN Working Group on the issue of human rights and transnational corporations, it is crucial to “replace Investor-State Dispute Settlement with a dispute resolution mechanism that is fair, transparent, independent, predictable and accessible to all parties on an equal footing and operates consistently.”

Mexico can play a large role achieving this goal.