Levi's, Children’s Place, and the Wrangler and Lee jeans company will now require their suppliers in this African nation to cooperate with a worker-led, enforceable program to eliminate gender-based harassment.

Gender-based violence and harassment, including sexual harassment in the world of work, are among the most pervasive human rights violations and most effective tools at preventing gender equality.

Recognizing the limitations of employer-led efforts to address sexual harassment through trainings and policies, trade unions and women’s rights advocates in Lesotho came together to negotiate a new program to prevent and address gender-based violence and harassment by addressing their root causes with accountability at its core. Lesotho, a landlocked country encircled by South Africa, has a significant garment export industry that primarily employs women.

These efforts came to fruition on August 15, 2019, with a set of landmark agreements among leading apparel brands, a coalition of labor unions and women’s rights advocates, and a major apparel supplier to combat gender-based violence and harassment in Lesotho’s garment sector. 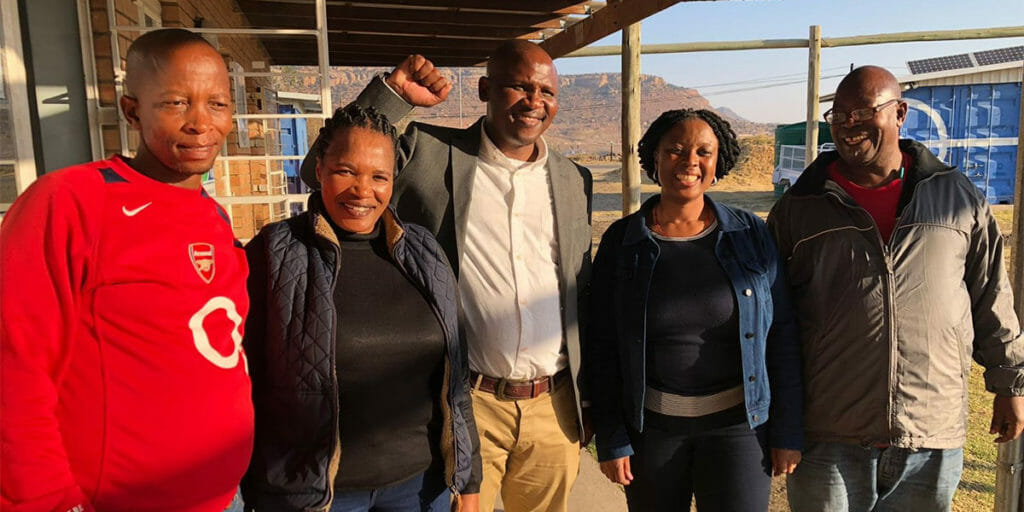 What are the deals?

The agreements condition these brands’ business with the supplier, Nien Hsing Textile Co., on its cooperation with a worker-led program to eliminate gender-based violence and harassment in the garment factories in Lesotho that produce their clothes.

The two U.S.-based NGOs and one trade union — the Solidarity Center, the Worker Rights Consortium (WRC), and Workers United — who assisted with the negotiations are non-party signatories to these agreements. The Solidarity Center will lead in assisting the parties involved in implementation of the program.

The agreements signed with the brands will operate in tandem with a separate agreement between Nien Hsing and the trade unions and women’s rights organizations in Lesotho to establish an independent investigative organization responsible for investigating allegations of gender-based violence and harassment at Nien Hsing’s Lesotho factories.

If it determines the code of conduct has been violated, the organization will direct specific remedies up to and including dismissal of the manager or worker responsible.

Representatives from the unions and women’s groups met with representatives of the Coalition for Immokalee Workers and gained inspiration from the organization Fair Food Program, which has been remarkably successful in eradicating sexual harassment and coercion in Florida’s agricultural fields — one of the world’s toughest labor rights environments.

In stark contrast to internal factory complaint mechanisms, this program will provide workers with a safe channel for reporting incidents of gender-based violence and harassment with the goal of increasing reports and limiting retaliation.

The program also provides an information and complaint line run by the women’s rights organizations in Lesotho, providing legal aid and counseling services to workers and an extensive worker-to-worker training scheme, and related education and awareness activities.

The definition of gender-based violence and harassment included in the agreement among Nien Hsing, the trade unions and women’s rights groups was modeled after best practices that union women identified and advocated for incorporation into the global convention and represents the first time that this term has been used in a legally binding tool to address these forms of abuse in the workplace, and is consistent with the definition contained in ILO Convention 190.

The agreement also protects associational rights by prohibiting any form of anti-union retaliation or interference with workers’ exercise of their right to organize.

Previously, restrictions on the ability of workers at the Nien Hsing factories in Lesotho to exercise their right to collective action was a major contributing factor to the high incidence of gender-based violence and harassment at these facilities.

How did we get here?

These agreements arose from an investigation conducted by the WRC, which exposed severe and extensive sexual harassment and coercion affecting 10,000 workers employed at Nien Hsing’s garment factories in Lesotho.

A measure of the pervasiveness of gender-based violence and harassment at the factories is that nearly two-thirds of the women workers with whom the WRC conducted in-depth interviews reported having experienced sexual harassment or abuse or having contemporaneous knowledge of harassment or abuse suffered by co-workers.

Women workers’ vulnerability to abuse is further exacerbated by the power supervisors and managers exert on workers’ continued employment, as well as their conditions of work. Workers who chose to report abuses typically faced retaliation.

These agreements will aim to change the culture of fear and impunity that previously existed in these factories, where the brands’ voluntary codes of conduct and social audits were relied upon to monitor labor conditions.

As outlined in the WRC’s report, the brands sourcing from Nien Hsing’s Lesotho factories did not detect gender-based violence and harassment via their voluntary codes of conduct and monitoring programs, which allowed the abuses to continue.

Further, workers, in offsite interviews, testified that Nien Hsing managers concealed the actual conditions and treatment of workers from brand auditors, including by pressuring employees not to tell the truth about their conditions of work to brand representatives who visited the factory.

Thus, workers’ only option to report these abuses was the internal grievance mechanism of the factory, which essentially entailed asking workers to trust the very management responsible for the abuses.

The approach to engaging brands, factory owners, unions and women’s rights groups together to address the root causes of gender-based violence and harassment, including gender inequality and unequal power relations between men and women, contained in these binding and enforceable agreements present a fundamentally different approach.

Rola Abimourched is the Senior Program Director at the Worker Rights Consortium where she leads the organization’s work in Lesotho.

Libakiso Matlho is a Gender and Human Rights Activist, Researcher and Director of Women and Law in Southern African Research and Education Trust-Lesotho.

Thusoana Ntlama is Programme Coordinator at Federation of Women Lawyers in Lesotho, she represented her organization during the negotiations to establish a program to prevent and eliminate gender-based violence at the Nien Hsing factories.

Robin Runge is the Acting Director and Senior Gender Specialist in the Equality and Inclusion Department at the Solidarity Center where she leads the organization’s campaign to end gender-based violence in the world of work.

A 'Red Deal': Why Indigenous Communities Belong at the Center of Climate Action