The former mineworker received the Institute’s Letelier-Moffitt Human Rights Award in 1990 for his leadership in the successful Pittston coal strike.

The Institute for Policy Studies joins our allies in the labor movement, the poor people’s movement, and other justice movements in mourning the loss of the great labor leader Rich Trumka.

Long before he was elected president of the AFL-CIO, Rich displayed his amazing coalition-building skills as the president of the United Mine Workers Union.  In 1989, he built the coalition that sustained the 10-month Pittston strike that won health benefits for thousands of coal miners.  For this and other innovative justice work, he won the 1990 IPS Letelier-Moffitt Human Rights Award. 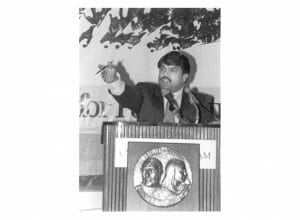 Rich worked closely with IPS on trade and worker rights issues for years, and he joined our annual Letelier-Moffitt celebrations several times.

In 2009, when IPS gave this human rights award to the National Roundtable Against Mining in El Salvador, Rich came to the ceremony to honor them.  When IPS leaders gingerly asked him how he felt about groups that had dedicated their lives to fighting against mining to save their rivers, he told them that he was in complete solidarity with the Salvadorans.

From a labor perspective, he said, mining is also tremendously dangerous — something he knew well from first-hand experience.

In fact, while we were talking he asked if we could speak in a less crowded area of the reception room, explaining that ever since he’d been trapped underground in a mining accident years earlier, he’d suffered bouts of claustrophobia. 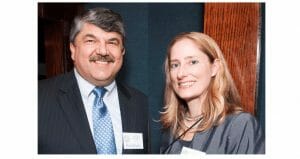 There was never a doubt which side Rich was on and he maintained a particular passion for defending mineworkers. In one of his last acts as the head of the powerful AFL-CIO, he recorded a video in support of striking mineworkers in Alabama.

IPS celebrates Rich’s life, his amazing coalition-building skills, and his dedication to fighting injustice wherever it appeared.

John Cavanagh is a senior advisor at the Institute for Policy Studies.