The contemporary claim that God is urging us on to get rich would appall the leading preachers of America’s colonial era.

At first glance, that might not seem to be the case. Today’s most popular preachers, after all, do share many similarities with their colonial counterparts. They organize networks of followers that cross denominational lines, for instance, and orchestrate large public events. They preach extemporaneously.

So did the most famous preachers of colonial America, men like Jonathan Edwards, George Whitefield, and John Wesley, the founder of the Methodist movement. Wesley only actually visited the American continent once, but he organized from England an extensive network of followers in the British colonies. Whitefield adopted Wesley’s practice of preaching without a carefully prepared manuscript. Edwards, a congregational pastor, would eventually adopt the same more emotional approach.

Edwards, Whitefield, and Wesley did not agree on all matters theological. But Edwards and Whitefield would resonate to much of the theology that animates today’s most famous preachers, men like Oral Roberts, Kenneth Copeland, and Joel Osteen. These preachers all share the same theological foundation. They see God as all powerful, all knowing, and active in the world. Everything that happens God either allows or causes to happen.

Edwards, Whitefield, and Wesley approached this foundation with a welcoming spirit. They could work with anyone who followed Jesus, a spirit that made it possible for 18th-century preachers to work together and create a movement that would grow into the “Great Awakening.”

Today’s celebrity preachers, by contrast, plead with people to follow Jesus, but they define what that following should mean. They show little eagerness to cooperate with each other or with people who have a different way of expressing what it means to follow Jesus. This lack of a “catholic” spirit would likely annoy our three 18th-century preachers, but not particularly appall them. 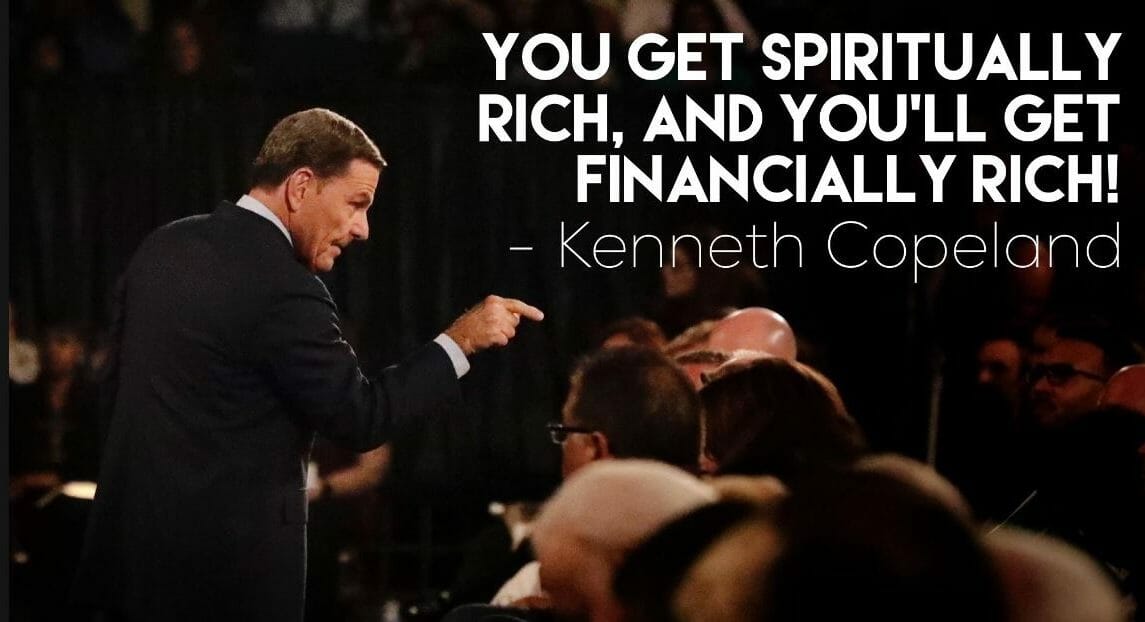 A Facebook posting by fans of Kenneth Copeland’s “prosperity theology.”

The 18th-century’s most famed preachers disdained the worship of wealth. They promoted moderation in all things, including consumption. They gave their followers a clear and specific direction: Beyond that wealth needed to meet responsibilities and obligations, all wealth should support the common good.

Making all you can, Wesley would explain, involves careful attention to ethical dealing with others. Saving requires living a modest lifestyle. Giving means sharing as much as possible with others.

Edwards, as an heir of the Puritan tradition, also promoted modesty and a simple lifestyle. Working for the good of all humanity, he believed, defines what it means to be a Christian.

“The affection and love that characterizes saintliness reaches not only for God but also for our fellow human beings,” Edwards wrote, “for they are made in God’s image.”

For Edwards, all wealth comes from God and, therefore, wealth belongs ultimately to the community, not to individuals.

Of the colonial-era preachers widely remembered today, Whitefield displayed the most interest in his own reputation, a vanity illustrated in the many editions of his autobiography. Each one attempted to show his good character by drawing attention to his personal poverty. It would have never crossed Whitefield’s mind that if he loved God, he would be blessed with personal wealth.

The idea that wealth beyond that needed to meet our responsibilities ought to be seen as common wealth doesn’t seem to have occurred to 21st-century prosperity preachers. Oral Roberts, one of the founders of prosperity theology, had a taste for an expensive lifestyle that included multimillion-dollar homes. Kenneth Copeland rates as the wealthiest pastor of our times, with a personal fortune estimated at over $700 million. He owns his own private jet.

Each of today’s prosperity preachers takes a slightly different approach, but their messages all have a common thread. They prescribe how their listeners themselves can become healthy and wealthy. The trick to getting that wealth? Oral Roberts urged us to give seed money to God and then let God reward you many times over. Roberts always had handy plenty of projects that needed seeding.

Osteen doesn’t just promise that God can make you wealthy. He also counsels those without wealth — and people living in poverty — to accept their condition. The reason? God has a purpose in not making them rich at the moment.

Our 18th-century celebrity preachers and the Great Revival that they precipitated, historians tell us, helped shape the unique American character and unite the colonists. The popular preachers paved the way for a new nation based on the claim that “All men are created equal.”

Our contemporary prosperity theology has next to no interest in equality. Prosperity preachers celebrate only individual wealth. They typically preach no one political philosophy, but they regularly posit that all taxes rate as bad because they reduce personal wealth.

To make matters worse, prosperity theology claims that God and God alone decides who will become wealthy and who will not. That leaves prosperity preachers with no incentive to ever take on the task of making the distribution of wealth in America more equitable. Why bother? God has spoken.

Edwards, Whitefield, and Wesley would be appalled. So should we.

Kenneth Bedell, an ordained United Methodist minister, has held multiple leadership positions in the Methodist Federation for Social Action and the Reconciling Ministries Network and traveled extensively for the International Association of Methodist Schools, Colleges and Universities. His most recent book: Realizing the Civil Rights Dream: Diagnosing and Treating American Racism.

The contemporary claim that God is urging us on to get rich would appall the leading preachers of America’s colonial era.

Another Presidential Candidate Who Doesn't Get It