A Dispatch from the UK University Staff Strikes

After years of seeing budget surpluses spent on buildings and other vanity projects, lecturers rebelled against proposed pension cuts.

British universities, particularly those founded before 1992, are doing well. With the highest undergraduate fees in Europe, at £9,000 (US$12,725) per year for most degrees for most students, many institutions boast annual surpluses of tens of millions of pounds.

Much of this money has been splurged on vanity projects. My own university, the University of Nottingham, has undertaken vast and expensive “improvements,” and it is certainly not alone. A few of these projects have added to resources for teaching and research, but many others — a jumbotron, a giant chess set, a catastrophe-prone IT system which has so far been impossible to implement, and a spectacularly tacky concrete amphitheater with a central fountain in the middle of a previously verdant hillside — are widely derided by students and staff alike for their preposterousness.

In the midst of this building spree, the language departments were subjected to a cruel and unnecessary “review” in which 12 positions were axed, all in order to save a paltry £1 million (US$1.4 million) per year. In most universities, the salaries of senior management have risen as steadily as the walls of the new buildings, while ever more teaching is done by staff on temporary, hourly-paid contracts. 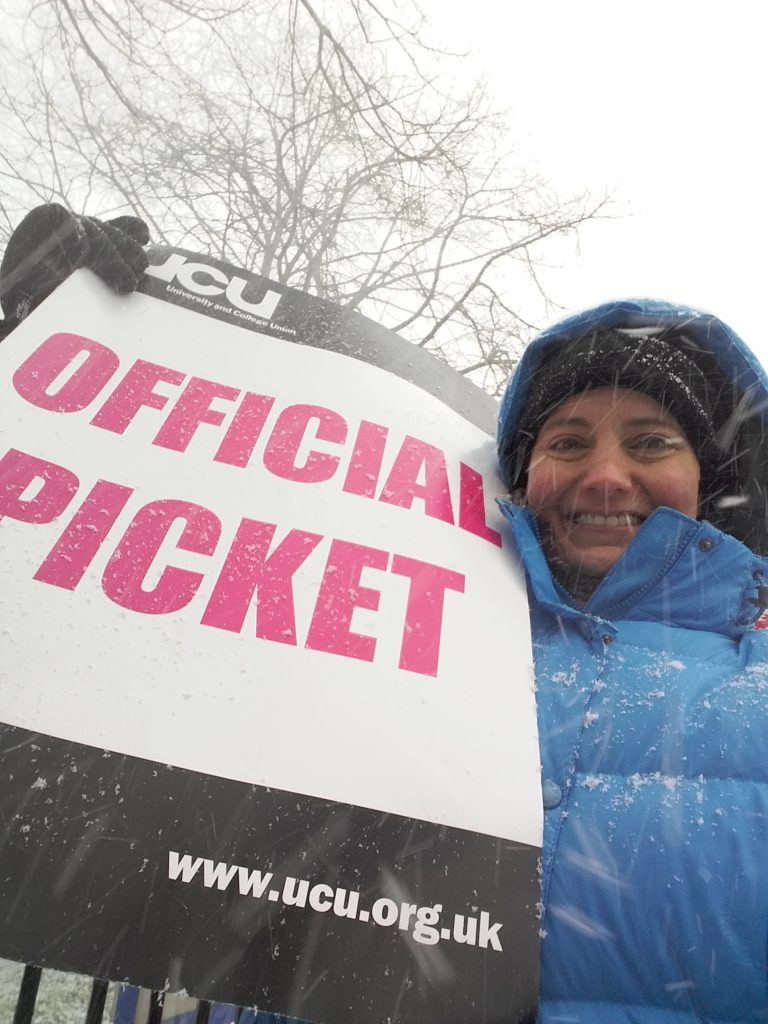 Against this backdrop of widening inequality and increasing precariousness for most staff, the Universities Superannuation Scheme (USS) pension fund announced last year that it was facing a deficit of more than £6 billion (US$8.5 billion). It would therefore have to move members from a defined benefit pension, in which one is guaranteed a certain monthly income in retirement based on career average earnings, to a defined contribution plan, in which the employee shoulders all the risk of stock market fluctuations and has no guaranteed income.

The University and College Union (UCU), a trade union representing 110,000 academics, researchers, postgraduate students, and other staff across the UK, estimated that average employees would be 40 percent worse off in retirement under the proposals. UCU also disputed the deficit, calling into question USS’ method for valuing its funds and exposing conflicts of interest on the USS board of directors. But with USS and the employers’ group, Universities UK (UUK), refusing to budge, it had no choice but to ballot for strike action.

This is where the surprises began for UUK. In late January, members of UCU voted overwhelmingly in favour of a prolonged strike: 14 days in the first instance in the middle of the spring semester. Other surprises followed: the Financial Times joined UCU in questioning the deficit. Exposés in the popular press highlighted the obscene expenses of university vice chancellors (presidents) and the annual pay raises worth twice the income of a mid-career lecturer which the managers of the “broke” pension fund had been awarding themselves.

Many students, angered by rocketing fees and corporatization, joined picket lines, organized and attended teach-outs and occupied buildings. Even a significant number of vice chancellors broke ranks, calling for negotiations to resume. Meanwhile, union membership soared, with numbers at my institution reaching their highest-ever level.

UUK was eventually persuaded to go back to the negotiating table: a significant concession, given that they had flatly refused to do so before the strike. Their revised offer was, however, only slightly better than the original one. Union members voted overwhelmingly on March 13 to continue the strike, which grew even stronger in its last few days.

Although we have now returned to work, the UCU has vowed to call another strike during the exam period in late May-early June if UUK does not come up with a significantly better offer. The latest news is that the two sides have reached an agreement, but once again it will be subject to a vote by union branch representatives. Watch this space…

Monica White is an Assistant Professor of Russian and Slavonic Studies at the University of Nottingham, and a member of the University and College Union.

Women and the Racial Wealth Divide

It's Time to Transform the War Economy