Rep. Jayapal of Seattle is among the leading progressive Democrats working to educate constituents about a fast-moving Republican tax plan.

Desperate to secure their first major legislative victory under the Trump presidency, congressional Republicans are in a mad rush to ram through a package of tax giveaways to the wealthy and big corporations before Thanksgiving.

To put the brakes on this push, many Democratic leaders, along with activist groups such as Americans for Tax Fairness and the Patriotic Millionaires, are working to mobilize opposition.

I had the opportunity to participate in one such event this week — a town hall in downtown Seattle hosted by Rep. Pramila Jayapal (D-Wash.).

Sumayyah Waheed, Sarah Anderson, and Rep. Jayapal appearing at a town hall on the Trump tax plan in Seattle on October 30.

“You know how at the Mariners and Seahawks games when they really want a lot of cheering they flash up on the big screen ‘NOISE, NOISE, NOISE’?” Jayapal asked the crowd at the Plymouth Church. “That’s what I need from you right now on this tax plan.”

Pounding the lectern for emphasis, the former immigrant rights organizer said the GOP claim that their tax plan would be good for the middle class is “lies, lies, lies.”

She cited Tax Policy Center figures estimating that 80 percent of the benefits of the proposal would wind up going to the top 1% of earners, based on the GOP’s tax framework released in September. More detailed legislative text is expected to be released on November 1.

3 numbers that explain the impact

Sumayyah Waheed, the director of All In for Washington at the Washington State Budget and Policy Center, and I joined Rep. Jayapal to answer questions about the tax legislation from local constituents.

All three of us emphasized the danger that the trillions of dollars in proposed GOP tax giveaways for the top 1% and big corporations will strengthen the hands of forces in the capital who want to slash spending on services that working families depend on.

And as Waheed explained, these cuts will have a devastating effect at the state level. Federal resources make up one-third of Washington state’s budget, including funds for health care, schools, transit, and food assistance.

Among numerous goodies for the ultra-rich, the Republican plan would repeal the federal estate tax on estates worth more than $5.5 million (or $10.9 million for couples). Only about 90 wealthy families in Washington state would be subject to the tax next year. And yet if this tax is eliminated, the lost revenue would amount to a sum that could cover nutrition benefits for over 200,000 people.

“That’s the kind of obscenity that they are proposing,” Waheed said. 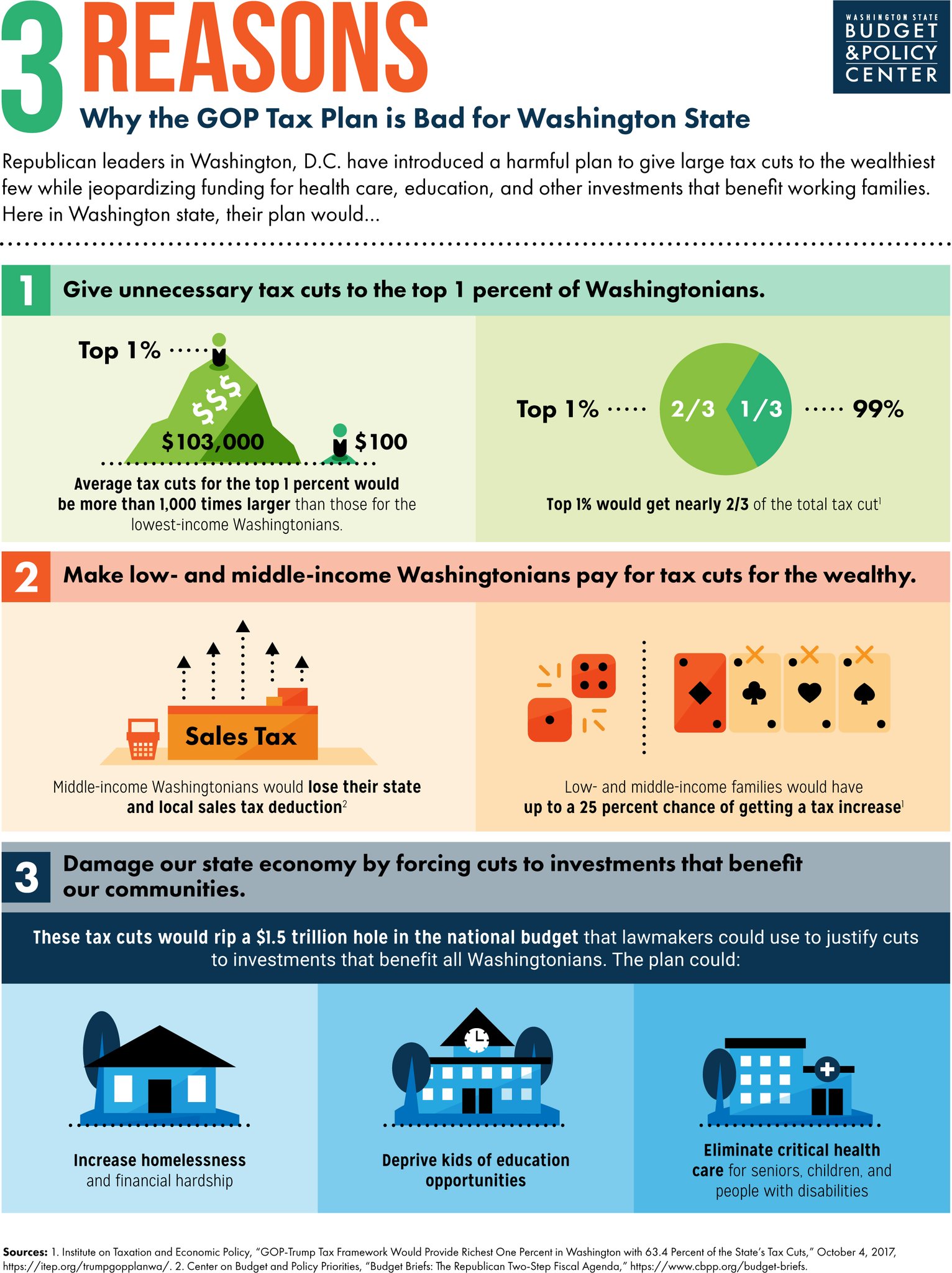 Rep. Jayapal touted the Congressional Progressive Caucus People’s Budget as an inspiring alternative to the Republican plan. This plan includes a number of progressive revenue raisers to support social programs, including Jayapal’s College for All Act, which eliminates tuition and fees at public four-year colleges and universities for students from families making up to $125,000 and makes community college tuition- and fee-free for all. She proposes paying for the education bill through a small tax on stock trades and other financial transactions that would overwhelmingly target high frequency traders and other Wall Street high flyers.

For the immediate future, however, Japayal stressed the need to focus on defeating the Republican tax plan. And she gave constituents a long list of ways they could help: reach out to friends in Republican districts and ask them to contact their members of Congress, hold discussion groups, organize Facebook live events, talk to co-workers during coffee breaks, and write op-eds.

And for constituents who work for corporations, she urged them to pressure their employers to not lobby in favor of the deal. “Many corporations have been speaking out about LGBTQ rights and immigration and we appreciate that,” Jayapal said. “Now we need them to speak out on the fundamental question of how we have an economy that works for everyone.”

Her parting words? “Let’s go win this thing — just like we did with health care.”

Trump Tax Plan: Helping the Middle Class Only Where They Don’t Need It