As I struggled my way through a crumbling transit system, the Senate was preparing to pass a tax plan that will decimate the resources needed to fix our nation’s infrastructure.

Make sure you find a stall with paper,” a woman warned me as she exited the restroom at Union Station, one of Washington, D.C.’s most venerable public landmarks. “Most of them have no paper.”

I followed the woman’s advice and checked several stalls before finding one with paper — only to see that the door to that stall was broken.

This was just one of the many signs of our crumbling public infrastructure I encountered in the course of my day yesterday — the day the U.S. Senate approved a tax bill that will decimate the funds available for infrastructure investment.

My day had begun with a hellish commute caused by my Metro rail station being closed for repairs. After decades of underinvestment, transit authorities now have to shut down stations for weeks on end just to keep the system patched together. My public transit alternative? Standing and waiting while three overloaded buses pass by without stopping.

In the capital of the richest country in the world, we can’t rely on our transit system to get us to work in the morning. We can’t even expect functioning toilets in our grandest public buildings. And this is just a tiny glimpse into the staggering infrastructure crisis across the country. The American Society of Civil Engineers estimates that more than $200 billion in additional annual expenditures are needed to fix our decaying bridges, roads, water systems, and other vital infrastructure.

And yet what do Republicans think is our nation’s most urgent need? Massive tax breaks for millionaires, billionaires, and big corporations that will add more than $1 trillion to the U.S. deficit over the next decade. Among other perversities, the Senate bill would reduce the corporate tax rate from 35 percent to 20 percent, cut the income tax rate for wealthy hedge fund managers and other business owners, gut the estate tax on the ultra-rich, and give tax breaks for private jet owners.

After walking up a broken escalator, I exited Union Station yesterday morning and headed over to speak at a rally against the Republican bill at the U.S. Capitol. From the other speakers I got a healthy reminder of just how trivial my daily inconveniences are compared to the devastation this legislation would cause millions of less privileged Americans.

The "People's Filibuster" against the GOP tax plan at the U.S. Capitol, December 1, 2017

I heard from a young woman who would likely be among the 13 million people that would lose their health insurance as a result of the Senate plan’s provision to eliminate the Obamacare individual mandate.

I heard from graduate students who’ve invested years pursuing their degrees and are already struggling financially. They may have to drop out of school if the House tax bill’s provisions to tax tuition waivers as income become law.

I heard from a disability rights activist about how the House version would also end the medical expense deduction, which enables people facing medical bills that exceed 10 percent of their annual income to deduct those expenses from their federal income taxes. According to the Center for American Progress, getting rid of this deduction, which helped 8.8 million families in 2015, would be especially devastating for people with disabilities and severe illnesses who frequently face thousands and even tens of thousands of dollars in out-of-pocket medical costs.

While my own travails paled in comparison to these tales of hardship, I nevertheless found myself getting agitated all over again on my commute back home. I’d just heard that only one Republican senator planned to vote against the bill — two short of the number needed to block it. At the last working metro station on my line, I got off to try to board one of the special temporary shuttles that are supposed to take us between the closed-down stations. 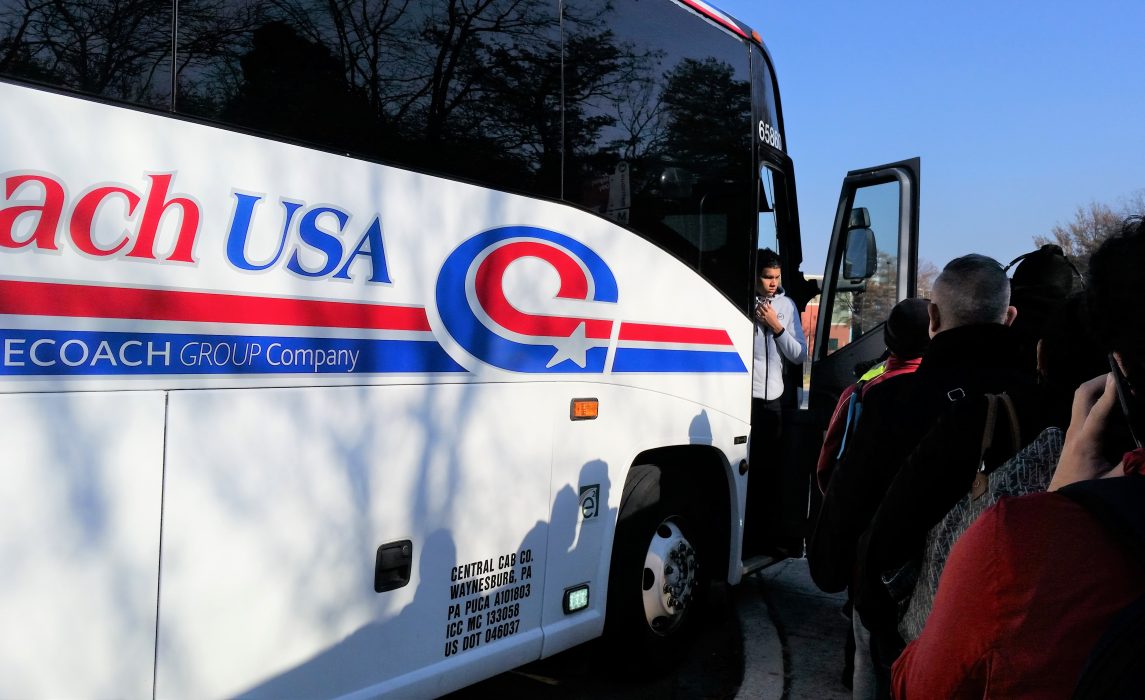 Attempting to board a private contractor bus from Pennsylvania to get from one closed DC Metro station to another.

By the time one of these shuttles pulled up, about 200 people were waiting — far too many to fit on board. As the human mass thrust me forward, I noticed lettering on the side of the bus indicating it was operated by a company from Pennsylvania. Later I learned that DC Metro couldn’t afford to pay their own drivers over-time, so they hired out of state private contractors.

When it comes to public spending that benefits the poor and middle class, the conservative mantra is that America is broke. We have no choice, they say, but to put up with inferior infrastructure, schools, and health care.

The reality is we are a nation of great abundance. The problem is that too much of our great wealth is flowing into too few pockets. The tax plan the Senate passed in the dark of night would do more than any legislation in decades to accelerate this inequality.

Fortunately, this battle is not yet over. There are major differences between the House and Senate versions of the GOP tax plan that need to be reconciled. The fight for a fair tax plan will continue next week — and as long as it takes until we get a government that acts in the interest of the public, not just the 1%.

With the GOP Tax Plan, a New Economic Epoch Begins