For nearly a hundred years, private foundations have been the big guns of warehouse-style philanthropy, raking in billions from their high-rolling founders and doling out grants piecemeal to grateful nonprofits.

But over the past two decades, donor-advised funds, particularly those affiliated with for-profit financial institutions (such as Fidelity, Goldman and Schwab), have been rapidly and relentlessly eating into the charitable giving pie. Rising like monsters from the deep, DAFs have finally caught up with foundations as the wealthy donor’s charitable warehousing vehicle of choice — and are poised to eclipse them in just a matter of years.

It was already hard enough for working charities to compete with foundations for the largess of wealthy donors. The meteoric rise of enormous monster DAFs spells even more trouble for our operating nonprofits — and the public that relies on them.

DAFs and foundations are both warehousing vehicles for the affluent.

Foundations and DAFs are charitable giving vehicles used almost exclusively by wealthy donors. This is because establishing either one requires a sizable financial investment, and because they offer tax advantages that apply only to people who have relatively high incomes.

When donors contribute money to either one, the donor gets a tax deduction right away for their gifts — a deduction that is subsidized by the American taxpayer by up to 74 cents on every dollar. Those donations are then held in the assets of the foundation or DAF until the money is later parceled out in the form of grants to charities.

The trouble is that, as we have documented, the money often doesn’t move out to public charities for a very long time. Private foundations are required to pay out just 5 percent of their assets each year in grants to public charities, while donor-advised funds have no payout requirement whatsoever. So gifts to foundations may take years to flow back out, and gifts to DAFs may never again see the light of day — giving taxpayers no return on their tax subsidy whatsoever.

Rest assured: private foundations are still big. In 2020, U.S. foundations had a whopping $1.2 trillion in assets, while all DAFs together only had $160 billion. This means that foundations have about seven and a half times more money in their coffers than do donor-advised funds.

But DAFs are attractive to a wide range of donors up and down the affluence scale.

DAFs offer a number of advantages to their donors that private foundations can’t. For one thing, DAFs are less expensive. It usually only makes sense to set up a private foundation if you have hundreds of thousands of dollars to use as seed money, but you can often set up a donor-advised fund for as little as $5,000 — and several of the largest commercial DAFs have recently waived their start-up minimums entirely. This makes them attractive to the merely wealthy who have a few thousand disposable dollars to devote to charity.

And DAFs are perhaps even more attractive to those at the top of the wealth ladder, because DAFs make it especially easy to donate complex appreciated assets such as corporate stock, real estate, and cryptocurrency. The ultra-wealthy donors who have access to these kinds of assets can receive significant tax deductions for donating them to a DAF, while at the same time avoiding the capital gains taxes they would have paid if they sold them instead.

And that means that DAFs are catching up to foundations —fast.

As fast as the wealthy have been ramping up donations to private foundations, their embrace of donor-advised funds has been even faster. DAFs have been the fastest-growing charitable sector in the U.S. for at least the past decade. Donations to DAFs rose from $9 billion in 2010 to almost $48 billion in 2020 — growth of 412 percent over just ten years. Giving to foundations grew by just 123 percent over the same period.

The result is that DAFs are coming into their own at last. By several measures, DAFs have caught up with private foundations — and stand poised to overtake them very soon.

DAFs now divert just as much money from working charities as private foundations do each year. 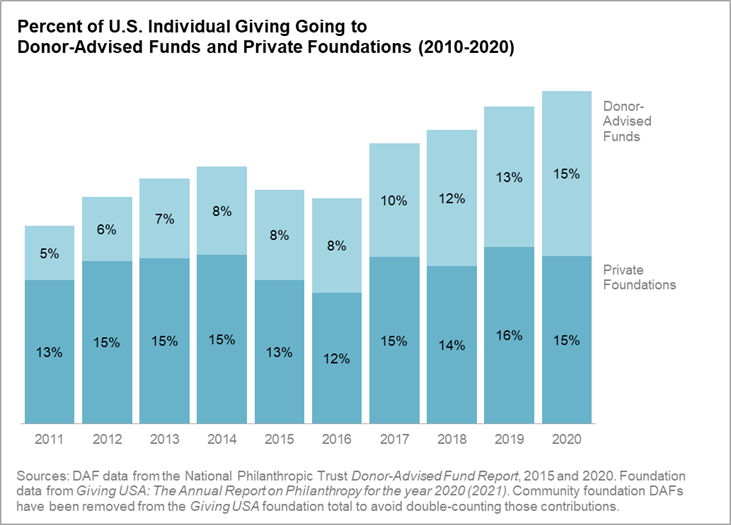 Individual giving in the U.S. hovers around a remarkably constant 2 percent of disposable income each year. Since giving to DAFs is growing at a much faster rate than giving overall, it means that DAFs are raking in larger and larger chunks of this essentially static charitable pie.

The largest DAF sponsors now take in more money each year than our largest public charities.

DAFs have seen such phenomenal growth that by 2020, six of the top ten recipients of charitable revenue in the country were DAF sponsors. 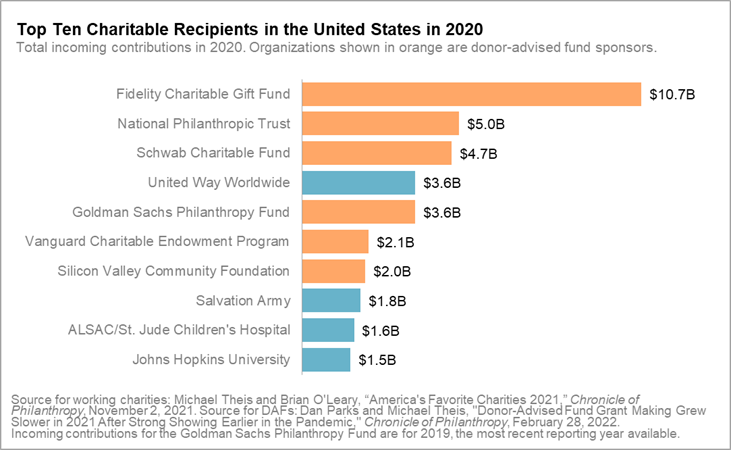 The largest commercial DAF, the Fidelity Charitable Gift Fund, became the top recipient of giving for the first time in 2016, edging the United Way out of the top spot on the Chronicle of Philanthropy’s annual list of top charities.

By the following year, four commercial DAF sponsors had broken into the top 10, along with the Silicon Valley Community Foundation — a community foundation at which 98 percent of incoming contributions go into its DAF program.

Since 2018, the Chronicle has separated DAFs into their own list so that they don’t drown out the working charities. But if the lists remained combined it would reveal a steady displacement of working charities in favor of DAFs.

DAFs are now essentially equal to foundations as the favorite charities of the wealthy.

In early 2022, the Chronicle of Philanthropy updated its annual reporting on the fifty top philanthropists in the United States. For many years, our country’s wealthiest donors’ favorite cause has been their own private foundations. But donor-advised funds have been steadily creeping up the list and in 2021, finally, leapfrogged over all working charities to come in second.

Of the $25 billion in identifiable gifts of over $1 million that the top 50 donors gave to charity in 2021, 79 percent of it — more than $20 billion — went either to private foundations or to donor-advised funds. Most of that amount was a $15 billion gift that Bill and Melinda Gates made to their own foundation.

But if it had not been for the Gates’ gigantic gift, the $2.65 billion going to donor-advised funds would have just nudged out the remaining $2.54 billion going to private foundations — meaning that DAFs would have broken into the top spot on the Chronicle’s list for the first time. 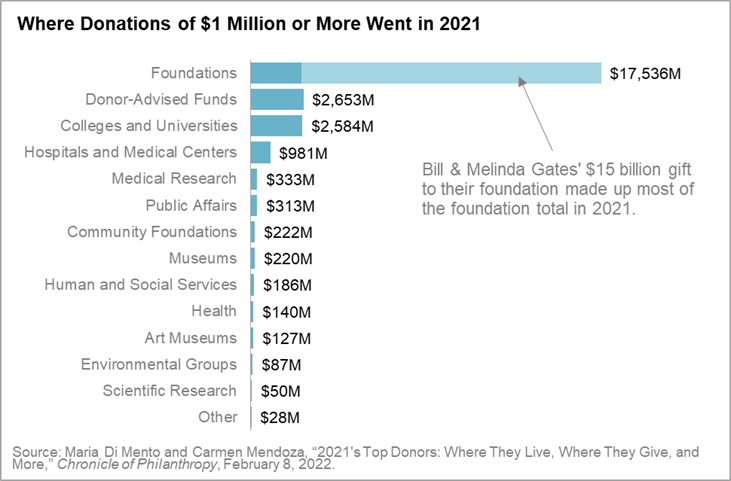 The largest DAFs now hold more in assets than many of the largest foundations.

There are more than 100,000 private foundations in the U.S., and, together, they hold much more in assets than the 1,000 DAF sponsors. But the very largest DAF sponsors now actually have more assets than most of our largest foundations.

Other large commercial DAF sponsors were not far behind. Schwab Charitable, for example, held more in assets than all but the three largest foundations. At current rates of growth, Fidelity, Schwab, and several other large DAFs are poised to outstrip the assets of our largest foundations in a matter of years. 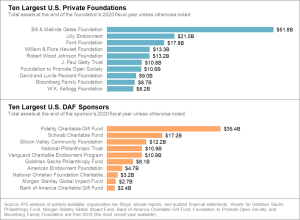 We must hold both foundations and DAFs accountable.

For years, the contributions pouring into private foundations were of great concern to our charitable sector, while donor-advised funds were a relatively small but rapidly-growing peril on the horizon. That is no longer the case. Donor-advised funds have come into their own at last, and arguably pose a greater risk to our charities and our civil society over the coming years than foundations ever have.

Through the charitable tax deduction, taxpayers subsidize wealthy donors’ contributions to both foundations and DAFs. This gives us all an interest in making sure that the money stored in them is actually used for the greater good, rather than serving as tax avoidance vehicles for the wealthy or lining the pockets of commercial money managers. It’s time to move the money out of DAFs — and we’ve outlined a number of reforms that would make this happen.

A Proposed Wealth Tax on Colombia’s 4,700+ Richest Would Raise $1 Billion