May Day Parade Stands Up Against Wage Theft

Activists demand accountability from Power Design, a subcontractor enabling the "race to the bottom" at construction sites around Washington, D.C.

As buildings rise in Navy Yard, so too do rents. The rapidly gentrifying pocket of Washington, D.C. has been lining the pockets of developers for years, but the money doesn’t always make its way to the construction workers building the luxury apartments popping up around the neighborhood.

That’s especially true for the workers contracted out by Power Design, a Florida-based electrical company that’s been sued more than a dozen times for wage theft. Activists targeted the firm’s Navy Yard construction sites on May Day to educate workers on their rights and remind the companies working with Power Design that they’re responsible for wage theft that happens on their watch.

The local DC chapter of Jobs with Justice has been leading the charge to hold Power Design accountable for its poor labor practices and to push city officials to uphold the laws meant to keep the company in check. A report released by the group earlier this year highlighted the company’s “race to the bottom” mentality.

Power Design, the report says, has faced at least 13 lawsuits around the country for wage theft. The report also details the company’s practice of classifying workers as independent contractors rather than employees, cutting corners on crucial protections and taxes and allowing Power Design to underbid other companies that uphold labor standards.

DC Jobs with Justice Executive Director Elizabeth Falcon shared this information with parade-goers as she led the crowd to various construction sites that contract to Power Design around D.C.’s Navy Yard neighborhood. “We need these developers who are taking these bids to understand we see them,” Falcon said. 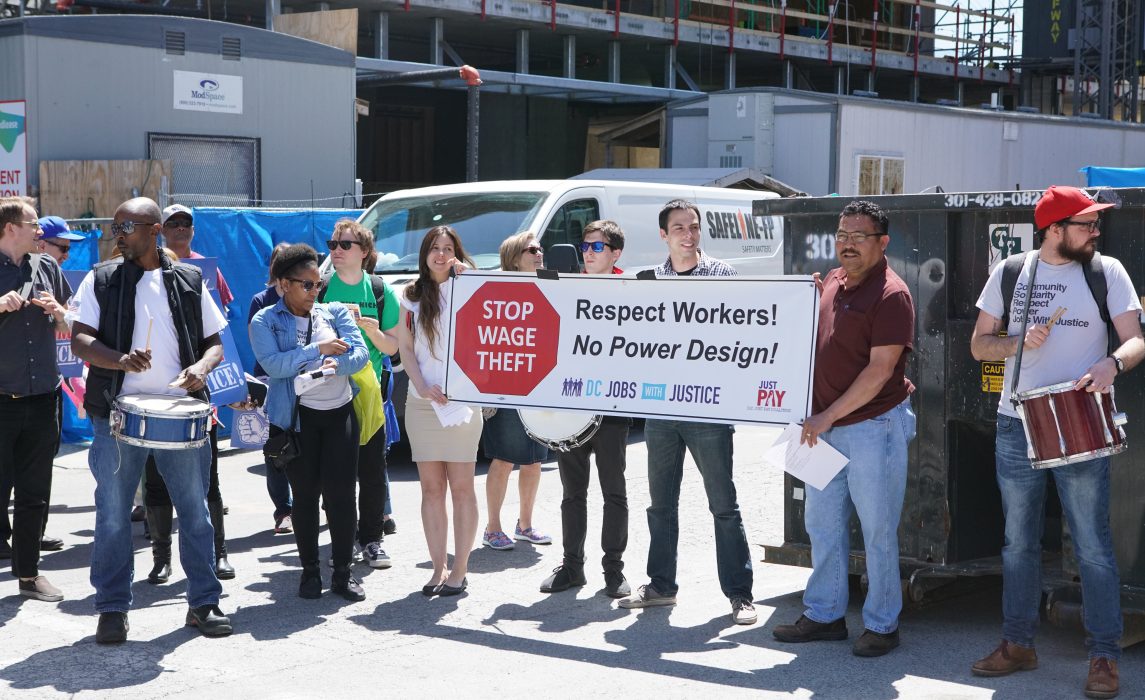 The parade route showcased the city’s prioritization of developers over workers and communities. Navy Yard is one of the fastest-growing neighborhoods in the capital city, and has also experienced one of Washington’s most profound demographic shifts in recent years. An analysis from DataLensDC found that the neighborhood became whiter and wealthier at a faster rate than any other area in the city over the last decade.

Activists engaged with office workers and residents near the ritzy riverfront, passing out fliers about wage theft in the construction industry to curious onlookers. A small team also spoke with crews on the construction sites along the parade route. Those workers received a separate pamphlet that listed proper licensing requirements, along with a number for workers to call to receive assistance.

Luis Gonzalez, a business representative with the International Brotherhood of Electrical Workers, was among the group speaking with construction workers on the job. He spoke about the subcontractor’s exploitation of the Latinx community, and was especially concerned for the undocumented workers facing additional barriers to speaking out against wage theft. It was time to tell Power Design to go home, Gonzalez said. “This is our home.”

The message was echoed by Sapna Pandya, Executive Director of Many Languages One Voice, a D.C. immigrant-led community organization that houses the Committee for Labor Solidarity and Worker Power. There’s a need to ensure D.C. laws actually work for workers, Pandya told the crowd. “It’s not an abstract issue. It’s a real issue that impacts D.C. on a daily basis.” The city could pass great laws, Pandya said, they still need to be enforced in order to protect workers.

That’s why several activists also spoke with developers and general contractors along the parade route who worked with Power Design, to let them know they were also responsible for any violations that occurred on their sites. Most of them were “rather stone-faced” as they listened, Perry Redd, the Employment Advocacy Director at the Washington Lawyers’ Committee for Civil Rights and Urban Affairs, told the crowd. But one company — Clark Construction — said they were willing to work with the group and comply with labor laws and standards.

While Redd said there was plenty to be done to ensure the promise was more than rhetoric, it was a good start. “That’s exactly what we’ve come to do — agitate, disrupt, and get them straight,” Redd said. “We passed along the message that exploitation will not be accepted.”

Negin Owliaei is a researcher at the Institute for Policy Studies and co-edits Inequality.org.

In Mexico, a Challenge to a Deeply Corrupt and Unequal Status Quo