Artisans rely on Etsy to market their creations, but the platform’s profit-maximizing policies hurt more than they help. Here’s why the sellers went on strike.

For ceramic artist Samantha Carter, closing her Etsy shop for an entire week was a huge risk. After much deliberation, she decided that taking a stand was more important than a week’s worth of earnings.

Last April, she temporarily toggled her Half Light Honey shop to “vacation mode,” joining 30,000 other Etsy sellers in a strike.

When Carter first joined the platform in 2013, Etsy was the premiere virtual artisans’ marketplace — a friendly network where artists could break onto the online selling scene.

“It still felt pretty small and easy to get recognized,” Carter told Inequality.org in an interview. But now? “It’s becoming harder and harder, especially after Covid, to be a small business competing with a rapidly growing billionaire class.”

Etsy has been rapidly changing. Drop-shippers and third-party sellers of mass-produced, wholesale products are proliferating across the site, masquerading as vintage vendors. Etsy CEO Josh Silverman even recently appeared to promote this behavior, admitting his goal is to compete with Amazon as a massive online retailer.

“There’s a lot of stuff on Etsy that’s obviously not vintage or made by artists,” Carter explained. “There’s so much competition and you really have to stand out on there to find consistent business.”

As a result, it is increasingly difficult for small sellers to thrive on Etsy, much less survive. 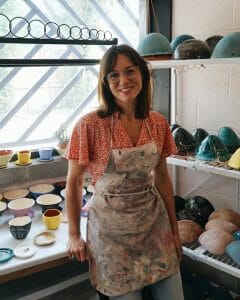 New features like the Star Seller badge have made the site even more cut-throat and exploitative. In order to get Star Seller perks, sellers must respond to customer questions within 24 hours, ensure that shipping is never delayed, and have a 4.8-star average rating. Etsy insists that such a system rewards artisans who “consistently go above and beyond,” but it really just makes their lives more difficult and demanding.

“We are always on call,” explained an Etsy seller and strike leader Kristi Cassidy in a public statement. “Precarity defines our lives…I’m dependent on an algorithm for my income.” On Etsy, stores with the Star Seller badge get shuffled to the top of the search algorithm, otherwise, sellers must pay a premium to have their store ranked within the first few pages of a search result.

Carter pays exorbitant amounts in fees to successfully sell on the platform, too. Over the course of her Etsy career, she has spent approximately $20,000 in site fees alone.

And so last April, Carter and her fellow Etsy sellers decided to take a stand and strike. What are they demanding? Canceling the fee increase, keeping drop-shippers in check, and ending the Star Seller program.

In response to the strike, Etsy released a statement about its commitment to “strengthening marketplace integrity” and “listening to sellers.” In spite of these lofty promises, they have done little to materially improve artisans’ selling experiences.

Etsy’s degeneration into a predatory marketplace is reflective of larger trends within the e-commerce realm. “Platform capitalism” — a term popularized by writer Nick Srnicek — has mushroomed over the last few years. Amazon is a prime example: the company cheats smaller sellers by copying their designs and then featuring their own price-slashed products at the top of search results.

Food delivery apps like GrubHub and UberEats are also exploiting small businesses and workers. DoorDash, for example, can take up to 30 percent of a restaurant’s sales in commission fees. Meanwhile, the app’s delivery workers are designated as “independent contractors,” which means they do not have basic employee rights such as minimum wage and overtime protections, the right to unionize, and insurance coverage.

Following the strike, Etsy sellers united to form the Indie Sellers Guild to keep the pressure on e-market tech giants and create equitable platforms for sellers. The guild aims to fight the “‘Amazonification’ of online marketplaces” — not just on Etsy, but everywhere “authentic handmade and vintage artisans are displaced by drop-shippers and sweatshop profiteers.” Just a few months after its formation, the Indie Sellers Guild argues it has successfully pressured Etsy to ease Star Seller stipulations, including lowering the number of orders required in a three-month period.

“Etsy has shown they are listening, now we will work for sellers to have an actual seat at the table,” Indie Sellers Guild said in a statement.

The Indie Sellers Guild is proving that building power from the ground up is possible. The ultimate goal? Creating co-operative marketplaces that work for artisans, not CEOs.

Nikki Ramsy is an Inequality.org Next Leader at the Institute for Policy Studies.

Artisans rely on Etsy to market their creations, but the platform’s profit-maximizing policies hurt more than they help. Here’s why the sellers went on strike.